We’re all aware of how protected the White House is, but we recently spotted an image on Reddit that shows just how protected the residency of the American president really is. The White House is one of the most protected buildings in the entire world and that’s not news to anyone. In fact, it probably has more security features than we’re even aware of. Protecting the president and his family was sort of an afterthought in the founding of our country. In fact, it wasn’t until 1812 that Pres. James Madison even stationed militia on the grounds of the White House.

And they were volunteers who positioned a cannon near the North Gate. In 2020, the protective measures of the main residence of the President of the United States have changed quite a bit, naturally. For example, there’s bullet-proof glass, as one would suspect. Also, every inch of the perimeter has infrared lasers surrounding it, and they detect even the tiniest threat against the White House. But let’s get to the fences. Here’s the photo we found on Reddit.

The fact is, the true extent of just how protected the White House is has never been released to the public and that totally makes sense. To even tour the White House, you have to submit an application at least 21 days before you want to visit, and there’s no guarantee you’ll be allowed to enter. Also, the area above the White House is a no-fly zone, something that most of us already knew. Planes that accidentally enter the airspace are given a warning, but if they don’t comply immediately, they’ll be taken down by one of the surface-to-air missiles that are located around the capital.

Did you know that the president has food tasters to make sure he doesn’t get poisoned? And it’s not just the paranoia of the White House’s current occupant (Trump). Reportedly, at an event during Pres. Barack Obama’s presidency, the president refused to eat at an event because his food taster wasn’t available. Who knew?

Happy Thanksgiving from the White House (and an impressive number of protective fences)! from interestingasfuck 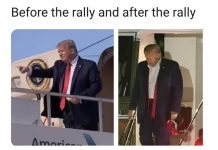