If you’ve ever been a single parent as I have, you know that no matter how hard you work to be a good parent, you’re going to have stressful times. A short video has surfaced of the King of Pop Michael Jackson reading a storybook to his young children, Paris and Prince. What’s awesome about this video is that it makes Michael Jackson, who is arguably one of the most recognizable celebrities to ever live, seem utterly relatable. Haven’t we all, at one point, been frazzled beyond recognition and just going through the motions?

The video clip, which surfaced on an unknown YouTube account, shows the superstar speaking in a very patient voice as he talks about the book. Watching it, I get the impression that he was awakened early, or perhaps was exhausted and trying to go to bed, but the kids were wound up. In the video, a tiny blonde-haired Prince Jackson randomly hands his dad a toy, which Michael absent-mindedly passes over to Paris.

Paris Jackson plays with it for a minute, then realizes that Prince is (for some reason) out of line. She looks at him accusingly and decides to put him firmly in his place, saying, “Don’t do that to Daddy, Prince,” and a baffled Prince asks, “What?” MJ, who seems to realize his kiddos aren’t paying any attention to the story, slams the book shut in the most frustrated parent way ever.

What we love about this clip is that it shows the superstar just being a casual single dad who is trying to keep his kid entertained. His pajamas are mismatched and he looks like he just woke up because his hair is all over the place. However, you can see how patient he was with his little children. Watch this sweet and totally relatable video below. 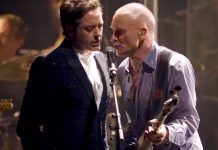