The Best Stuff Online
Home Inspirational These Newlyweds Did Something No One Has Ever Done With Wedding Reception...
1.3k
ShareTweetStumbleRedditPin
PocketTumblrLinkedinBuffer

With the ongoing pandemic, the world was changed in ways most of us never expected. Our lifestyle suddenly needs drastic adjustments. With the restrictions of any form of mass gatherings, millions of scheduled weddings were forced to a postponement. In one or another, every one of us was affected by this global health crisis. If there’s a beauty in the midst of unfortunate events, that’s humanity always find ways to bring out the best of their negative situations. One great example is this lovely couple from Parma, Ohio. Tyler and Melanie Tapajna already planned out their wedding day. With the dilemma of either canceling their most-anticipated day or risking their 150 guests, they came out with arguably a much better solution.

They canceled their formal reception, instead decided to forgo an intimate ceremony together with their family and close friends. However, they already pre-ordered food from their favorite caterer, Betty’s Bomb Ass Burgers. They could ask for a full refund, but they find a better use of the food — donate them to a shelter. The then newlywed Tapajna couple contacted Laura’s Home, a non-profit organization that feeds and houses homeless women and children in Cleveland and asked permission to giveaway their wedding food. Everything seems working out in place as Lena Brown, the owner of Betty’s, then worked directly with the kitchen manager of Laura’s Home. The couple, the caterer, and the non-profit collaborated to figure out the best way to serve the food in a cafeteria-style kitchen. 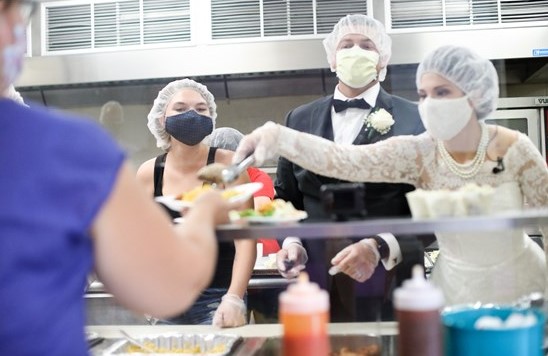 Donating their wedding food instead of asking for a refund would be more than enough as a generous gesture. But, the couple’s hearts are too big for that! Besides giving away their supposed meal for their wedding guests, Melanie, in her beautiful gown and Tyler in his tux, also wear their hairnets, face masks, and gloves to serve their new set of guests. Rich Trickel, the CEO of The City Mission, which oversees operations at Laura’s Home, was thrilled to welcome the couple to a shelter with about 145 single women and several pairs of mothers with their children. 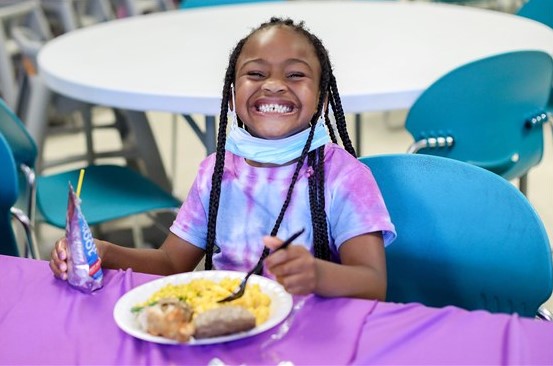 The couple paid their caterer as planned and what’s more amazing is that their wedding covered so much prepared food the shelter was able to feed its residents for several days. The couple already in the habit of donating to charity since 2016 when they met at a friend’s wedding. However, this time is far more significant as they both witnessed everyone’s reactions in persons. Not to mention, it was their first day as husband and wife.

After serving their guests, the couple took off their hairnets, masks, and gloves to join the dining table and meet everyone. The Tapajna called this unforgettable moment, “the biggest blessing.” And, indeed, it was for them and all the people they brought happiness.