This Oregon dad was just trying to make their community playground handicapped-friendly so his daughter, who has been in a wheelchair since she was born, won’t have a hard time playing on it. Little did he know that 11 years later, playgrounds all across the United States will be using his design to revolutionize playgrounds and help people enjoy – no matter what their disability is.

G Cody QJ has a wheelchair-bound daughter who is 4-years-old. One day, they went to a playground for the first time in 2009. But to his disappointment, he found out that Harper couldn’t even play there. It turned out that the woodchips that they surrounded the playground with makes the play equipment in the middle inaccessible to a wheelchair. 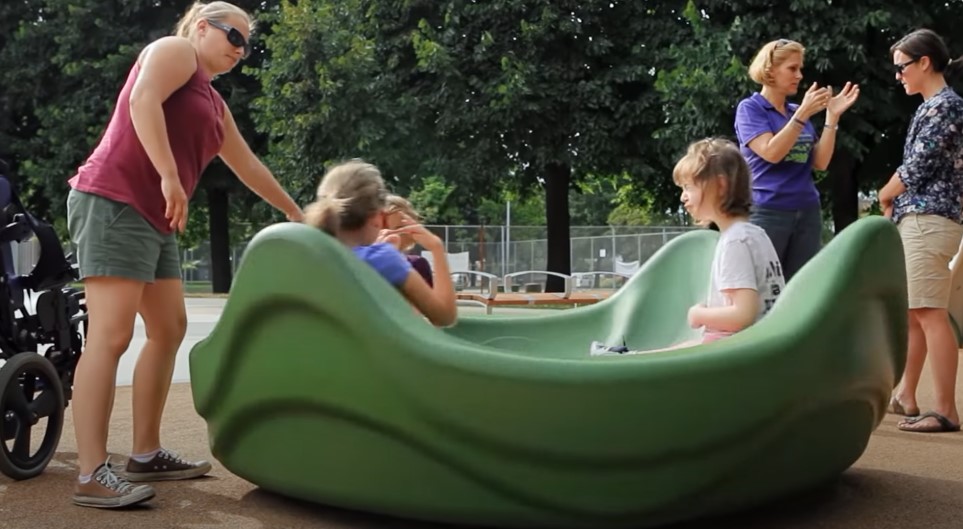 His frustrations reached the city’s park and recreation department. However, he was told that they did not have enough budget for reconstruction. On a better note, they also added that if it will be privately funded, then they would support the renovation. This is when Goldberg launched “Harper’s Playground”, o non-profit movement that aims to open more handicap-accessible playground in the US. After three years since the foundation’s birth, they have successfully raised enough funds to reconstruct their first park to the public in November 2010.

The design of the playground has three levels of enrichment for children which Goldberg explained. “The space has to be physically inviting, so if you use wheels you can get absolutely everywhere,” says Goldberg. “Then we say it should be socially inviting, with circular seating areas, communal gathering spaces, and the use of nature. And then the third level is what we call emotionally inviting, and that’s by using art, good design lines, music, and things that put us in an even better emotional state.”

Since the first launch, playgrounds across the US have been using his idea to build their own playground that everyone can enjoy.