The Best Stuff Online
Home Celebrities Gordon Ramsay Is Savage AF, And The World Eats It Up
1.1k
ShareTweetStumbleRedditPin
PocketTumblrLinkedinBuffer

From television shows to culinary cook-offs, Gordon Ramsay continues to push and redefine what it means to educate the world in the culinary arts. His reality television shows have captivated millions, and his several 3-star Michelin restaurants cultivate and produce only the best quality, and presentation, of food.

But, when it comes to his life and how he chooses to portray it, there is only one word that comes to mind.

Mind you, there are moments where he is on your side.

And sometimes, he’s trying to save your life.

… And then there are moments where he is done with your lack of hygiene.

But, there is an inherent reality that has to be faced. For him, the culinary arts is not simply a designation for some elite group of individuals. He truly believes that good food should not only be available to everyone, but be standard.

Which means that fast food is not something he gets down with very often.

But, we all know when he hits that moment of savagery. The moment in every show, and on every Kitchen Nightmares episode, where he is so disgusted and so taken aback that personal insults come into play.

And that, my friends, is why savagery has become a way of life for him. Because not only does the lack of palatable food shake him to his very core, but it causes him to judge not just the creator of the food, but the devourer.

Ladies and gentlemen, I present to you the one person in the world that has taken the term “savage” and created a lifestyle around it.

His Twitter is golden, his television shows are fascinating, and after all of the proof and the late-night television show appearances, there is only one question that races through my mind whenever he speaks:

How many times does his wife smack him a day? 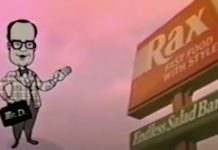