Jodie Foster is an American actress who most people will recognize. She got her acting debut in 1968 on the TV show “Mayberry R.F.D.” (something I didn’t know until today.” And in the last 1960s and the early part of the 1960s, Jodie worked in several different TV series. Her film career began when she starred in Disney’s “Napoleon and Samantha” in 1972. She was later in Marin Scorses’s “Taxi Driver,” a 1975 psychological thriller. In this show, she played a child prostitute and this is the role that made her well-known. As a teen, she became a popular teen idol when she starred in another Disney movie: “Freaky Friday.”

Jodie quit acting to attend Yale, and after that she transitioned into adult roles, eventually winning an Academy Award for Best Actress for her role in “The Accused” in 1988. She’s much more than just a talented actress, however. Jodie has some directing roles under her belt as well, including episodes for the hit Netflix show “Orange Is the New Black,” “Black Mirror,” and “House of Cards.” But before all of this, she was a child in a Copperton TV commercial in 1965 when she was only three years old. A gifted child, Jodie learned to read at the tender age of three, and later attended a French-language prep school, where she became fluent in French.

This skill allowed her to act in various French films and she even dubs herself for French-language versions of the American films she stars in. The school she attended is the Lycée Français de Los Angeles. Her French is good enough for her to serve as an interpreter, and she did so when she was at a press conference after her role in “Taxi Driver.”

We’re not sure how she ended up singing in French, but here she is doing just that at the French TV show Midi première in 1977. 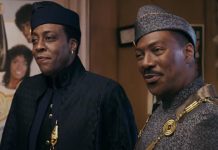