There are few TV shows like “All In The Family,” which explored real issues in everyday Americans’ lives. While it wasn’t one of my favorites growing up, I do remember episodes in which Archie Bunker, the star and family patriarch, butted heads with George Jefferson, his one-time neighbor and middle-class black business owner who would soon have his own iconic show titled “The Jeffersons.”

Archie Bunker represented the average white, middle-aged male, who at the time and perhaps still now wielded the largest political influence in America. Many of his views were then and are especially now reprehensible and backward. However, this was part of Caroll O’Conner’s charm.

This incredible actor was able to make Archie Bunker fully human, exposing some of his vulnerabilities and other dimensions that made him less of a 2-dimensional racist and sexist character and more a reflection of the attitudes held by many white men (then and sadly now).

One episode, in particular, was one in which Archie comes home only to find his wife, Edith, acting strangely. For some odd reason, she’s trying desperately to hide something, but Archie being Archie, is just annoyed by her weird behavior.

Edith is another character on the show that rubs a lot of folks the wrong way. She’s written to be a ditzy, high-pitched, obedient wife that accentuates Bunker’s “I know it all” bravado.  Her character does have rare moments in which she stands up for herself and puts Archie in his place.

I think instead of being a comic relief doormat, she represents a much deeper concept of a woman struggling between being “a good housewife” and her own sense of self-worth. Personally, I feel she’s the strongest character on the show who the Archie Bunkers of the world could not live without.

Eventually, all of Edith’s machinations fail, and Archie discovers a photo of Lionell Jefferson (George Jefferson’s son) holding Linda (Archie’s niece) in a very intimate photo. Lionell, of course, is Black, a fact that Edith knows would set of her husband’s temper, as he is an unapologetic bigot.

The look on Archies face after doing a brilliant comedic double-take says it all.

Soon Archie interrogates Edith as to the meaning of the picture, and that’s when she and their children explain the situation.

You can watch the scene to see Archie’s full reaction below.

As funny as this scene is, it represents a genuine and troubling aspect of American racism that plays out nearly every day. Many white men like Archie do not think white women (who they view as pure) should date, sleep with, or marry Black men, who they feel are (impure).

I can speak on this from experience as I’ve never met my wife’s father, who refuses to acknowledge my existence because I’m Black. My wife told me that her dad would rather see her miserable with an abusive White man than a decent Black man.

In many ways, I think this scene is a sobering reminder that we do not live in a “post-racial” society and have a very long and hard road ahead toward some semblance of racial reconciliation.

Please let us know your thoughts on this video and consider showing it to friends and family to spark a good conversation. 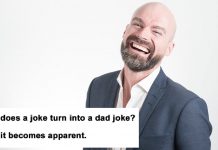 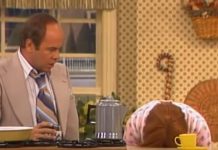