This week we found out Glee actress Naya Rivera passed away at the age of 33. She was renting a boat with her son on a lake in California. She drowned in the water. She mustered just enough energy to save her son but not herself.

She was best known for her role as Santana Lopez on Glee from 2009 to 2015. She had a powerful, soulful singing voice that she used on many occasions performing on the show. Her on-screen relationship with the character Brittany did a lot for LGBTQ representation on television. In one of the last episodes, the two characters got married in a double wedding with the gay male couple on the show.

Glee showed the very real moment that happens to many gay people when Santana was outed to her family. They showed Lopez’s family disowning her just like many real gay people have to deal with.

Here is one of the performances of Santana singing her love for Brittany with the Taylor Swift song “Mine.” They were an on-again, off-again couple throughout the series until they eventually got married in one of the last episodes.

In an earlier season of the show, Santana Lopez went off to college in Louisville, Kentucky. Here she is singing with some of the cheerleaders from that college. This is a powerful, soulful rendition of “Nutbush City Limits.”

She also had another powerful solo with this Adele mashup of “Rumor Has It” and “Someone Like You.” This is at a point in the series where the girls on the glee club decided to form their own group and they wowed the boys with this performance.

These are just a few of the moments that made her one of the main characters on Glee. She had a powerful singing voice and was a strong lesbian role model for teens everywhere. She will be missed.

Here is a compilation of some of her best performances. 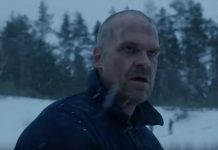 The First Stranger Things 4 Trailer Has Been Released

WATCH: This Viral Heineken Ad Will Make You Question Everything