The Best Stuff Online
Home Performing Arts This Is What Figure Skating On A Mountaintop Lake Looks Like —...
1.8k
ShareTweetStumbleRedditPin
PocketTumblrLinkedinBuffer

Figure skating on an icy mountaintop might not be on everyone’s list of things to do, but for Katrina Lazazarotto it was a heavenly experience.

The young woman, who is not a professional skater and had not done any figure skating for four years, found herself becoming involved in what she refers to as a “random adventure” when a friend if she’d take up the challenge of skating among the clouds.

The frozen lake where the figure staking took place is located on top of a 5,000-feet tall mountaintop in British Columbia and is accessible only by helicopter.

Video of the event shows the helicopter gliding over majestic snow-capped peaks which seem to stretch on forever.

“I’m freaking out,” Lazazarotto can be heard saying as they descend towards the frozen blue lake that appears to sit on the very edge of the world.

As she glides out across the icy wonderland, her friend takes soaring aerial shots from his helicopter. The results can only be described as magical.

The viewer can imagine the sheer exhilaration and joy that Lazazarotto must have felt as she danced across the ice in this dramatic and amazing landscape.

“Looking around and seeing the mountains, I couldn’t feel anything but grateful,” she later said of the unusual figure skating experience. “It was the first time in a very long time I’d felt that alive, that me.” 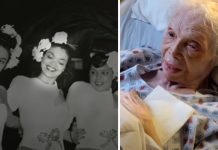 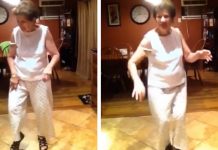