The Best Stuff Online
Home Lifestyle 10 Animations That Show How Faces Change Over Time
1.3k
ShareTweetStumbleRedditPin
PocketTumblrLinkedinBuffer
This series of photographs shows 100-year-old Czechs transitioned into photos of their younger selves. This animation was made from interactive elements on Czech news site Aktuálně, where you can compare both sets of photos and get short information about the people featured.

Photographs show portraits of one hundred years old Czechs. Nowadays, there are over 700. In fifty years their number will reach 14,000. How these people see their life after such a period? The majority of those I approached agree that with advancing age life is faster; until, at last, the life will pass in a moment. Time is shrinking, as are the faces of the elders. I wondered what changes and what remains on a human face and in a human mind in such a long time, and in such a short while in relative terms. I wondered how much loneliness of the old age weighs, and what memories stay in 100-year-old mind.

This set of comparative photos (of archive portraits from the family album and contemporary portraits from the present time) explores the similarities and the differences in appearance and in physiognomy. The characteristics of personality change throughout life but it seems as if individual nature remains rooted in the abyss of time.

The pairs of photographs are accompanied by brief facts from the people’s physical and psychic world. 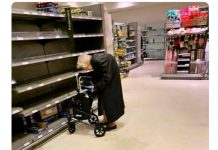 Life Pro Tips Everyone Should Commit To Memory