Do you like horror movies and scary stories? The fact is, some people love them and some people hate them. And some of us are a weird hybrid of both. I typically don’t watch them because I’m a person who is easily spooked, but at the same time, I’m drawn to them just as many other people are. According to Glenn Sparks, Ph.D., a professor at Purdue University’s Brian Lamb School of Communication, one reason some people enjoy a good ghost story/movie is how they feel after the movie is over.

When you engage with something scary, you may have an increased heart rate, and your respiration and blood pressure increases as well. This is a kind of physiological arousal, Sparks says. Gross! Weirdo! Me, too. As it happens, some people are wired to enjoy things like this and some simply are not. Another reason for liking spooky stuff is the novelty. Brian Coldrick is a guy who probably isn’t a creep but is a profoundly creative artist who creates what he calls one-shot horror stories.

An Irishman living in London, Brian says that he gets the ideas for his cool drawings in a myriad of places, including his own imagination. At first, he was inspired by what he read on Creepy Pastas, the internet’s spooky folktales websites. He has an ongoing book and webcomic called “Behind You: One-Shot horror stories.”

Brian has been an artist and illustrator since 2003, and he began his creepy and wonderful webcomic in April 2015.

OK, I’m going to bed now…and sleeping with the lights on! 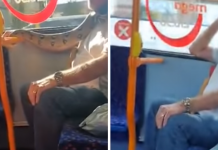