Most humans reach for their smart phones and tablets when they’re bored. Even those of us who grew up without the internet (re: we played outside) would much rather be online than in the sun.

The same can’t be said for otters. At least, not this one in particular.

In a video guaranteed to melt your heart, a human uses modern technology to capture an otter juggling an ancient tool. A man can be heard asking:

To humans, it’s just a rock. To this otter, it’s pure joy.

The little guy just lies on his back under the sun, tossing a rock around and having the time of his life. Another otter is seen nearby, seemingly bored with the shenanigans. Let’s give that one some internet access.

Perhaps the human race could learn a thing or two from this juggling otter. We’re more likely to download a virtual juggling application, though. 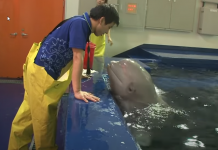