This month, a black man in Nashville was afraid to walk in his own neighborhood after the unrest in his neighborhood in south Nashville, TN.

Shawn Dromgoogle grew up in the 12 South neighborhood in Nashville. His family has lived there since 1966.

“Yesterday I wanted to walk around my neighborhood, but the fear of not returning home to my family alive kept me on my front porch.”

The next day, he wrote:

“Today I wanted to walk again and I could not make it off the porch. Then I called my mother and she said she would walk with me. I still kept my ID on me and my phone in my hand but I walked. #ICan’tBreath #ICan’tSleep #ICan’tWalk.”

Posted by Shawn Marqus Dromgoole on Wednesday, 27 May 2020

By that next evening, over 300 people had commented on this post, all of them offering to walk with him. The day after he made the post, over 75 people showed up to “Walk with Shawn.”

Shawn has since held three walks in his neighborhood and more people have joined him every time.

Kerry Conley, one of his neighbors, told CNN:

“I don’t want anyone in our neighborhood or anywhere to not feel safe or welcome. It wasn’t an option to not be there and walk with Shawn. I will never know what it is like to feel that way but I had to let him know that my house is a safe place and I will always walk with him.”

He plans to travel across the country and join anyone who wants to walk with him. His first stop was a summer camp in Ohio, where he joined a group of middle and high-school students for a walk.

Conley has launched a GoFundMe to fund Shawn’s walk across the country. It has raised over $18,000 and counting. 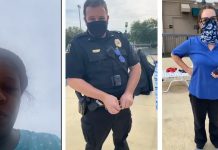