On a feat to observe one of the most iconic animals on Earth, an adventurous wildlife videographer, Gordon Buchanan, came as close as possible to a family of polar bears. In a video from his BBC nature series The Polar Bear Family and Me, he even comes face to face with the huge bear that would devour him without second thoughts.

With just one wrong move or a faulty wall, he’d surely be the animal’s lunch! But that doesn’t stop him from exploring and filming these beautiful creatures. While at some point his fears greatly outweighed his fascination, he went on and tried to keep his cool while recording.

It was a bright, cold day when Gordon decided to get in a protective box in the middle of the bear’s habitat. And just a few minutes later, a very hungry female polar bear found him and went on straight to him to get an even closer look! Once the ursine was sure that Gordon’s going to be one tasty meal, she went on and tried to break into the box. With a nose a thousand times more powerful than humans, and a strength there’s no way we can be at par with, it was so terrifying to see how the enormous animal persistently tried to break the barriers between her and her prey.

She systematically applied all the tricks she knew even to the point of towering above Gordon and giving us a clear look of her build. She went on and used her massive paws to scratch and pound, and even tried to breach any possible opening with her powerful jaws.

Too bad for her the reinforced box is designed to withstand such brutal onslaughts. So, once she realized that she’s expending far too many calories for something too difficult to get, she backed off.

Watch the video below to see perhaps one of the most terrifying moments in Gordon’s long career.

It was a memorable encounter being a few inches close to something this intimidating and enormous. While the cage kept Gordon safe, there’s no way that he hasn’t felt a mini heart attack every time the bear pounds and sniffs him! I definitely wouldn’t try that one for a lifetime! 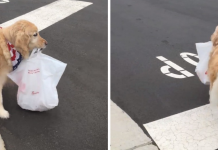 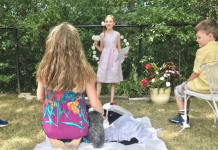 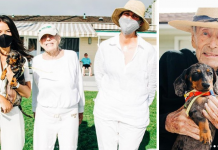