Keepers at Odense Zoo in Odense, Denmark noticed suspicious footprints leading away from their penguin habitat. Following the wet trail down a service corridor, they found five of their Gentoo penguins attempting a daring escape. One of the keepers quipped that the penguins had watched “The Penguins of Madagascar” too often. Once the penguins realized that they had been spotted, they scampered back to their enclosure, presumably to re-watch “The Penguins of Madagascar” for tips. 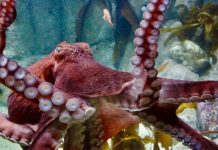