A devastating quake that ripped apart buildings and roads hit the Pacific coastline last April 16 where at least 654 were reportedly killed.

President Rafael Correa, said last week: “Reconstruction will cost billions of dollars,” and the impact on economic growth “could be huge.”

It is unfortunate to see this much lives gone in an instant. Thankfully, at least 7 people did not make that list when they were saved by Dayko, a Labrador that is now being hailed a hero.

Dayko was a 4 year old Labrador and a rescue dog for the Ibara fire service. He has been with the, for 3 and a half years, starting when he was barely a year old.

Last Friday, with a heavy heart, they announced that Dayko passed away due to “massive coronary myocardial infarction and acute respiratory failure.” He was not able to withstand the exhaustion.

Here are what is said about him.

“We regret to inform you that today the [fire service] is in mourning because [we] just lost Dayko who participated in the work of searching in Pedernales,” said the fire service.

“This four legged friend gave his life in the line of duty. Thank you Dayko for your heroic efforts in Pedernales and in various emergencies where you were present.

“You held high the name of the K9 unit.”

This is indeed a very touching story with a tragic ending. 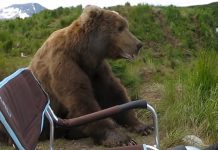