An absolutely adorable 2-year-old little girl went viral after her mother posted a video of the child nailing her first performance of ‘The National Anthem.’

Amelia Bubenik of Granite Bay, California, sang the words without skipping a beat. Sometimes, we just need a little sweetness in our lives, and that’s what this 2-year-old dressed in red, white, and blue delivered.

Typically, it would be difficult for such a young child to remember so many words, but Amelia didn’t miss a single word.

O say, can you see, by the dawn’s early light,
What so proudly we hailed at the twilight’s last gleaming,
Whose broad stripes and bright stars, through the perilous fight,
O’er the ramparts we watched, were so gallantly streaming?
And the rockets’ red glare, the bombs bursting in air,
Gave proof through the night that our flag was still there.
O say, does that star spangled banner yet wave
O’er the land of the free and the home of the brave?

Amelia didn’t shy away. Instead, she belted out the patriotic song. I think we’ll hear more about this young child in the future.

Amelia’s father and grandfather both served in the U.S. Navy.

I think Amelia should start a band with 7-year-old Malea Emma, who also has no qualms about belting out the National Anthem. Little Malea sang her rendition of the anthem during the LA Galaxy vs. Seattle Sounders game, and oh boy, she is good!

Have you ever seen so much cuteness in your life? I sure haven’t. After singing the national anthem at the game, Malea Emma Tjandrawidjaja scored a chance to sing for the American Idol judges.

I just knew if I Googled her to see what she’s done since she nailed it during the game, something would pop up. I’m pretty sure we’ll hear more about both of these children soon. They’ve certainly earned the attention. 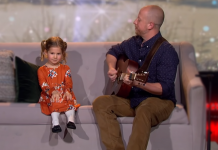