At a young age of 15, Alina Zagitova mesmerized Olympic crowds with her record-breaking figure skating performance to Black Swan, a Russian classical ballet.

Alina was very strategic about her performance and added a lot of jumps that earned her higher points, and thus, the gold medal. Alina’s performance brings the audience through a journey of emotions, just like Tchaikovsky’s intended over a hundred years ago for Swan Lake.

The Popularity of Figure Skating

Figure skating is a sport done solo or in pairs. Figure skating involves movements such as spins and jumps, as well as complicated footwork, done with tremendous grace. The movements and techniques are judged, which is what makes this sport so competitive.

Figure skating began in the 1700s but did not become expressive and formalized until the early 20th century. Figure skating came to the Olympics in 1908, and today figure skating is one of the more popular sports.

Meaning Behind the Black Swan

The Black Swan is from Tchaikovsky’s Swan Lake. The white and black swans in Swan Lake represent the battle between good and evil. Swan Lake itself is a classical ballet telling a story of a woman under a magic spell who lives as a swan during the day, but a woman at night. The spell can only be broke by a man who promises to love her.

Who is Alina Zagitova?

Alina Zagitova is from Russian, and she is the daughter of an elite hockey player. She began skating at age 12, and her international debut happened in 2016 when she competed at the Junior Grand Prix competition. At this first competition, she nearly broke the record with her point total.

She broke the world record more than once, and she is the eighth-ranked female singles figure skater in the world.

In 2018, Alina performed her figure skating routine to Black Swan during the Olympics. She landed a challenging jumping combo that included the triple Lutz-triple loop, a move only 10 other women have ever successfully completed in a competition.

You can watch Alina’s astounding performance in this video.

Her performance at this Olympics earned her a gold medal and helped her beat her teammate Evgenia Medvedeva. Alina is now the second-youngest female Olympic gold medalist. 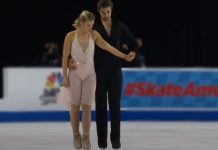