Legendary rocker Joe Cocker may have died in 2014, but his music lives on. From August 15 to the 18th, 1969, Woodstock took place on Max Yasgur’s farm in Bethel, New York. The event promised “Three Days of Peace and Music.”

The concert did not disappoint anyone. Images on the television captured the essence of the event that will always be known as Woodstock. Organizers reportedly expected 50,000 people to attend the concert; however, well over a half-million descended on the farm in the small town of Bethel, New York.

Even with the over-populated show in what was to inarguably become the most famous rock festival in the world, it was a mostly peaceful event.

Joe Cocker’s incredible performance at Woodstock catapulted the artist into stardom. Sure, he had been in the music business for a while, but he was finally recognized worldwide with his distinct raspy, powerful, and soulful voice while dressed in full hippie attire.

Especially well-received was when Cocker covered the Beatles’ song “With a Little Help from My Friends.” Cocker began the song, saying:

“We’re gonna leave you with the usual thing. The only thing I can say—as I’ve said to many people—is the title just about puts it all into focus. It’s called ‘With a Little Help from My Friends’. Remember It.”

Cocker bobbed his head as he belted out the lyrics while bouncing around the stage as he gripped the microphone, almost as if the song was going through him. It was clear that that song was made for him to perform.

Applause rang out from the crowd after the song ended, and Cocker gave a nod to his group, the Grease Band.

Cocker appeared scruffy, but it only added to the essence of the mega-festival with anti-war hippies dancing to the music with flowers in their hair.

Joe Cocker died in 2014 at the age of 70 after battling lung cancer. His music is immortal, though. 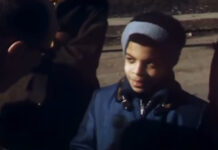