Tara Taylor had just fixed her 3-year-old daughter Rylee’s hair like a princess, and like any proud mom she wanted to show her Facebook friends just how beautiful her little girl looked. So she snapped a photo and posted it on the social media site. And as you can clearly see, Rylee is about as adorable as a little girl can possibly be.

But two of Tara’s friends noticed a strange detail in the photo of Rylee: The girl’s left eye appeared to be glowing.

Tara’s friends told her it was probably nothing, but Tara also says:

“They said ‘Hey, I’m sure it’s nothing. It’s probably the lighting, but your daughter’s eye is glowing and you might want to have it checked out because it’s a sign there could be an issue with her eye.'”

A trip to the family pediatrician was followed by an appointment with a retina specialist.

Rylee was promptly diagnosed with Coats’ disease, a rare condition that can cause one eye to lose vision or become totally blind.

Dr. Jorge Calzada with the Charles Retina Institute and Baptist Eye Clinic says the earlier the condition is diagnosed, the better the long-term prognosis for the patient:

“The significant problem we have with children is that a child won’t say, ‘Mommy, I can’t see out of my right eye.’ It is usually caught in an unexpected way.”

Since Rylee is only 3, the prospect of her losing any of her sight is extremely small.

And she will continue to be the prettiest princess on anyone’s Facebook page. 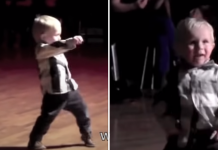