The Best Stuff Online
Home Relationships This ‘All of Me’ Flash Mob Proposal Will Melt Even the Hardest...
1.3k
ShareTweetStumbleRedditPin
PocketTumblrLinkedinBuffer

If there’s one word that never goes out of trend, that is “love.” Most songs from our ancestors up to now have always something to do with that word, especially when it comes to romantic love. A couple understanding each other deeply and for such a length of time is hopefully enough to find unique romantic ways to express their feelings. Typically, for a guy, making a marriage proposal could mean a stressful yet exciting challenge. However, some guys take it to another level of effort and creativity to make sure he will get the sweetest “yes” as an answer.

So here how it goes: it started as simple dining out together. Then the guy leaves his girl for a while, most probably excusing himself to go to the restroom. A few seconds later, the magic begins with two violinists played music all of a sudden. Then an unknown guy has sung John Legend’s “All Of Me” backed-up with a choir of other guys in such beautiful harmony. Later on, our story’s main guy came out with a guitar and led the singing instead. With an added saxophone player, she can’t help but cry as he sings to her in front of the public showing to the world how much she means to him. 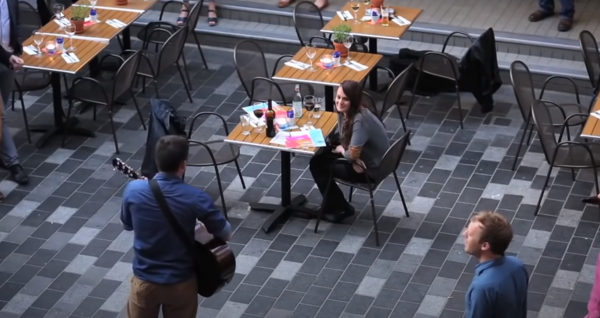 In that once-in-a-lifetime moment, the lucky girl understands that it was all for her. The song “All Of Me” perfectly fits his intention of showing how much he’s willing to give for their relationship. See for yourself, and you can only imagine the love he put on this grand gesture of his love. Even the unsuspecting crowd was fascinated with the well-planned lovely surprise. 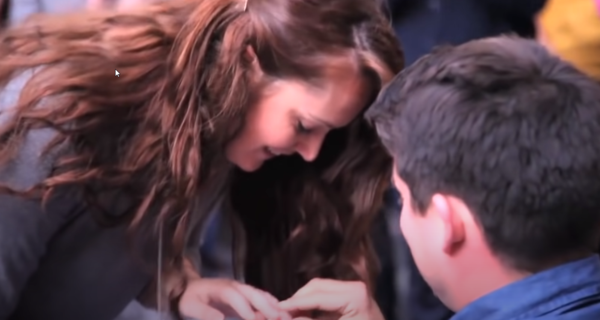 As we hoped for, the girl responded with a “yes” while the mob was singing Pharell Williams “Happy.” These kinds of videos make other couples, and even singles out there get inspiration and hope that such incredible expression of love is possible for all of us. Just remember: there are many ways to express ourselves to someone we love.

A marriage proposal doesn’t need to be a big surprise, such as orchestrating a flash mob. As long as it’s sincere and true, then it’s worthy of a “yes.”