Ryan is an amazing 12-year-old. Even though he is autistic, he has never let that slow him down, especially when it comes to his artwork.

But the reason Ryan became an artist in the first place is because his service dog, Zeus, needed treatment. Zeus has been diagnosed with a form of canine lupus, meaning he makes frequent visits to the vet, which costs money.

So when he realized his family needed funds to help defray the cost of Zeus’ treatment, Ryan decided to sell his artwork. Ryan’s mom, Twyla,  posted a Craigslist ad to help Ryan sell his art. And he has already raised several hundred dollars this way.

Sounds like while Zeus may be man’s best friend, he also has a best friend in Ryan.

Want to buy some of Ryan’s artwork? Then go to his Craigslist page. 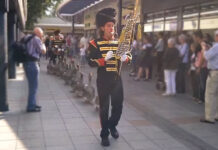