The world-class opera singer, Andrea Bocelli, is, here again, to serenade us and melt our hearts with his divine voice. But this time, he has a special guest! In an intimate video clip, we get to see a glimpse of the famous tenor’s personal life. His daughter, Virginia Bocelli, has accompanied him in an adorable performance. Together, they’ve enchanted everyone with their version of Beethoven’s Ich Liebe Dich. The special moment was filmed in their house at Forte Dei Marmi, a seaside town in northern Tuscany, where the family was quarantined.

Andrea, together with his wife Veronica Berti and their daughter Virginia, have contracted a mild case of COVID-19 earlier this year- from which they’ve recovered quickly. This unfortunate event, though, hasn’t stopped Andrea and his family at all from bestowing the world the beauty of music through their magnetic talent. In fact, we’ve even been lucky enough to see the bond they share as we watch their performances captured at the comforts of their home. The Italian singer also made sure to inspire people to make use of this “slightly paradoxical situation” and find ways to improve ourselves just as he is trying to. 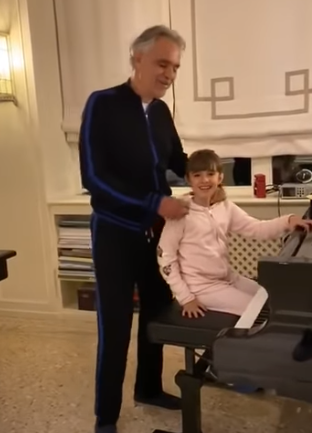 For those who are curious, Andrea’s little princess, Virginia, was born in 2012. And at eight years old, it’s no surprise that you can already see the talent that runs in her blood. Along with her previous performances, it’s evident that she has inherited his father’s exquisite artistic genetic heritage. And while she’s only backing up his father and playing the piano on the video, this little girl actually has a beautiful voice. She may be the baby of the house, but she definitely has something big in store for her. 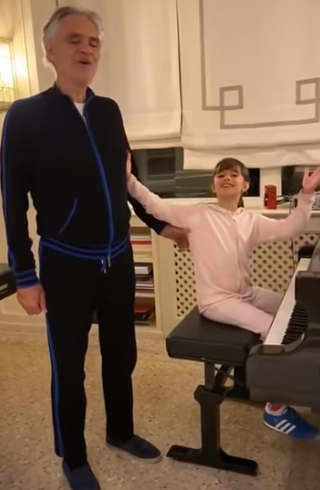 Watch the wonderful video below and see some heartwarming father-daughter bonding of the Bocelli.

Amid the difficult situation the world is facing, it’s a blessing to be able to hear such a heavenly voice as Andrea’s. Not only did this expressive piece tickled our ears, but it also brought a beautiful message to all of us. “It’s a way to express our love for you all and share a moment of optimism, hope, and positivity,” Andrea stated in the video’s caption.