Darth Vader is one of the most iconic characters in the Star Wars franchise. Once a heroic Jedi, he was lured by the dark side of the Force, ultimately leading him to become the villain. He turned into the Sith Lord, who’s very powerful and ruthless that everyone in the galaxy fears him. And any fan will surely know when he’s about to show up thanks to his very own iconic theme song. The piece called the “Imperial March” is a loud and heavy song that can immediately make you tense up in any scene. When you hear it, you know Vader is planning something wicked.

So, you can just imagine how surprised everyone was when he showed up in the middle of a performance of the theme song! It was during an orchestral concert in 2017 held at the Rochester Symphony. A conductor started to play the Imperial March when a couple of stormtroopers barged in the stage, followed by Vader’s close guards. Finally, the Sith Lord himself appeared, totally invading the concert. He then proceeded to order the stormtroopers to capture and detain the shaking conductor while he steps up on the podium. Holding a lightsaber baton, he took over the conductor’s place and continued the song.

Who would’ve known that this villain has such hidden talent? With his strong presence, he led the entire orchestra as they passionately play his song. Either that or he’s slyly using the Force to play all those instruments. As he finished the piece, he turned around to face the audience and bowed with grace. Perhaps finally recovering from the shock, the conductor went back to stage to thank Vader for his presence. Not only that, but he was also able to muster up the courage to politely ask for the lightsaber baton and use it to carry on with the concert. Of which the Sith Lord surprisingly complied! 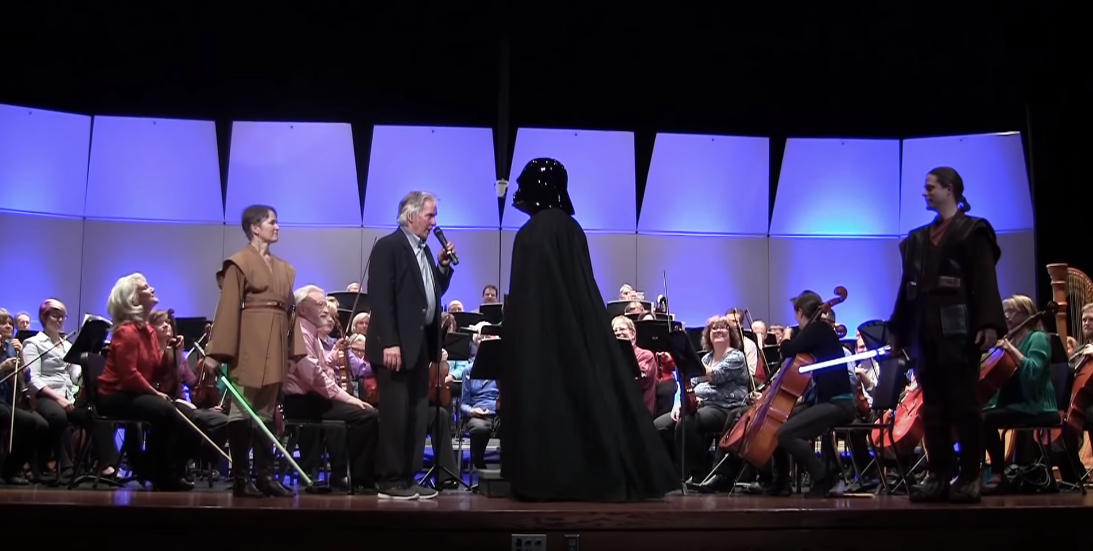 Watch the unbelievable concert below and see Darth Vader conduct an orchestra for the first time.

The performers are actually members of Central Garrison, an all-volunteer international Star Wars costuming club. With their exceptional cosplay skills, you can’t even tell the difference from the original cast!