The Best Stuff Online
Home Music 14-Year-Old Angelina Jordan’s Cover of Adele’s ‘Someone Like You’ Will Hypnotize You
1.2k
ShareTweetStumbleRedditPin
PocketTumblrLinkedinBuffer

Regardless of liking her music or not, pretty much everyone knows who Adele is. She is a multi-award-winning musical artist with an incredible, unique voice that has won the hearts of millions. She has sold over 120 million records, making her one of the best-selling artists in the world.

What many don’t know is that she got her start from the humble world of MySpace, a now-defunct social media platform that existed before Facebook or Instagram. A friend had posted a three-song demo of Adele singing, which found its way to the ears of Nick Huggett at XL Recordings. From there, she ended up being signed to the label and started her incredible career.

The Magic of the Internet

Though Adele had formal training from the BRIT School for Performing Arts & Technology, one cannot help but draw some parallels to the young Angelina Jordan. Angelina has also found fame with the internet, though a little differently. At the age of seven, Angelina performed on Norway’s Got Talent and awed the judges and crowd.

The story of this young girl quickly spread across the internet, making her a star. Since her discovery, Eps, singles, and one album named “It’s Magic.” However, she has refused to sign any record deals while she is young and still growing up. She has had over 1 billion views on Facebook because of her amazing covers.

That wise decision is something that Adele herself may have made. Adele has repeatedly taken a couple of years off between tours and recordings so she could enjoy her life.

Despite their similarities and differences, the two are both fantastic in their ways. Jordan pays homage to the talented Adele by covering her 2011 release, “Someone Like You.” This cover is both haunting and hypnotizing. If you closed your eyes, it would be nearly impossible to guess that this young lady has such an amazing voice! However, you shouldn’t just take our word for it. Take a few minutes for yourself and experience her talent.

Here she is, Angelina Jordan, with her rendition of Adele’s “Someone Like You.” This talent, blended with this song, is likely to give you goosebumps! If you enjoy her work, be sure to check out her other songs.

Angelina has a good head on her shoulders and an amazing talent. If we were to guess, she would be giving Adele a run for her money in a few years! 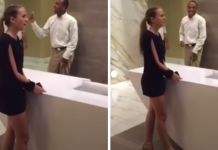 Girl Does an Impromptu Duet Lobby Concierge While Waiting 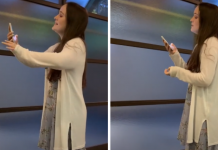 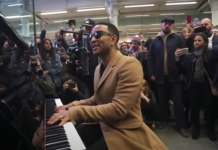